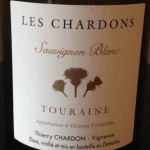 If you’re a Sauvignon Blanc drinker, we are confidant that you will enjoy this well-made, flavorful Touraine from Sophie and Thierry Chardon. The Windham Wines tasting group got together a week ago and each of us rated this our number one white of the tasting (out of a total of 15 whites). It was our […]

2012 Birichino, Malvasia Bianca, Monterey– $15.99 Though Birichino is a new producer, the winemakers, Alex Krause and John Locke, have been making wine with others for years.  Most notably, they spent years with Randall Grahm at Bonny Doon which has strongly influenced their approach to producing wine. According to Alex, we “make wines that we […]