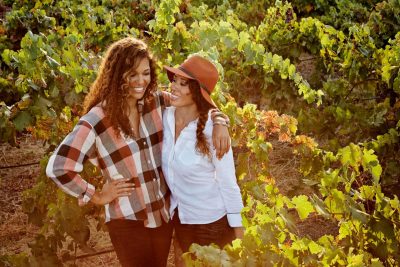 We’ve survived the long, slow month of January. February brings noticeably more light, and now every time I say the word light, I think of Amanda Gorman, whose Inauguration poem left most of us gob-smacked. She began with the question “where can we find light in this never-ending shade?” and finished with the hope and directive that “there is always light, if only we’re brave enough to see it. If only we’re brave enough to be it.” That young woman filled with courage and conviction was testimony to the loss of so many valuable human resources in our country’s history. Race continues to define and confine all of our lives.

February is Black History Month. We’ve included two wines among our recommendations that are made by black winemakers. The McBride Sisters genesis includes a wild story about two half-sisters, one raised in California, the other in New Zealand, who did not know the other existed. Finally at ages 16 and 25, they met. It’s worth a listen. Mouton Noir is a winery started by André Mack, who began his career at Citicorp Investment Services, then followed his wine passion to become a sommelier, including at Thomas Keller’s French Laundry before being tapped to be head sommelier at Per Se. Learn more about both in our post, Windham Wines’ Picks for Black History Month.

The virtual tastings continue as a fun way to spend a late Saturday afternoon. Please note below that for the Women Winemakers series, we have switched Holm Oak and Netzl, so that we begin that series with Christina Netzl of Netzl Winery in Carnuntum on February 27th and end with Becca Duffy, of Holm Oak in Tasmania on March 27th.

February 18th has been designated National Drink Wine Day. It could be more ridiculous, and is– February 5th is, among other special days, National Shower with a Friend Day, while February 9th is National Toothache Day. But, . . . we offer to help in your celebration of National Wine Day and offer some suggestions below.

We look forward to seeing you soon. Be well, customer-friends.