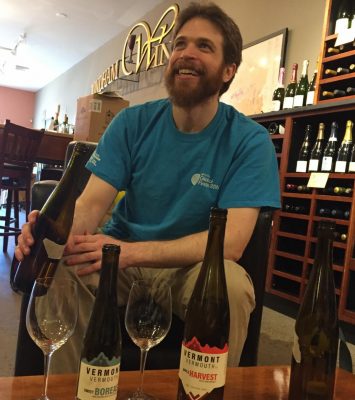 We are so happy to offer a mostly local, new Vermont fermented product– Vermont Vermouth. The creation of Kobey Shwayder, a self-described “flavor specialist” (who also has a Ph.D. in linguistics from Penn), these Vermouths and one “apple wine” are seriously delicious. But, you don’t have to take our word for it– come by on Friday, March 8th, anytime between 4:30-6:00 and let Kobey pour you some and tell you about them. If you want to try them, they are available in the shop– $16.99.

Vermouth is a fortified wine. Kobey began with juice from some Vermont La Crescent grapes that he fermented, then “flavored” with different herbs (from Foster Farm Botanicals in Calais) and spices to create two different styles of vermouth. His dry vermouth, which he named Zephyr, was steeped with rosemary and yarrow to accent La Crescent’s herbal and citrus notes. His sweet vermouth, called Boreas, is a winter warmer, with savory-sweet tones from mugwort, yarrow, juniper and bay leaf balanced by caramel, allspice and cinnamon. Kobey makes a third vermouth-styled apple wine (starts with a base of Dutton Farm cider) that he steeps with caramel, cinnamon and allspice. By the way, Kobey makes his own caramel.

Come by on March 8th to wish Kobey well and discover how much you like vermouth!