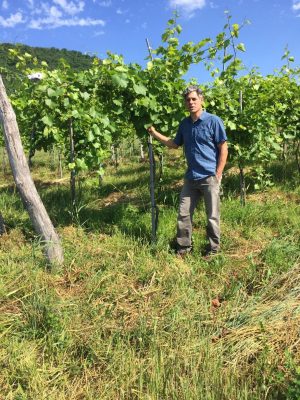 Windham Wines is so pleased to offer this local wine made from grapes planted and tended by long-time customer-friend, Shabir Kamal. Shabir is married to Hannah Thurber whose family has been farming at Lilac Ridge Farm since 1937. The property is now managed by third-generation farmers, Ross and Amanda Thurber, who converted to organic farming more than 20 years ago. Shabir selected a light-intensive, south-facing site in a field grazed by the family’s dairy cows, a pasture that formerly grew Christmas trees. Perhaps you bought one of those trees for your family years ago?

Wine grapes and wine were part of Shabir’s family culture. Shabir’s uncle got the wine bug and began making wine from purchased grapes. Shabir observed that growing up, “there were always carboys and barrels lying about.” Shabir started with 10 vines in his backyard in West Brattleboro. He transitioned to an experimental plot at Lilac Ridge in 2016, planting the hybrid red variety, Marquette.

Hybrids are varieties developed by crossing European wine grapes from the vitis vinifera genus with grapes from labrusca or riparia vinifera, both of which are indigenous to the US. While these hybrids were cross- bred initially to address phylloxera– both labrusca and riparia are unappealing to the aphid– the preferred (and often only legal) solution in Europe has been to graft vitis vinifera vines (e.g., Pinot Noir, Cabernet Sauvignon, Chardonnay) onto rootstock from the resistant genus, keeping intact varieties traditional to their regions. It turns out, however, that riparia and labrusca make a terrific foundation for cold climate varieties that bud late and ripen early and can survive protracted frigid winter temperatures. Cornell and University of Minnesota have been busily creating new, interesting hybrids that experimental vignerons like Deirdre Heekin, owner and winemaker of La Garagista, and Shabir, have shown to have wonderful potential. Conceived at the University of Minnesota and introduced to growers only in 2006, Marquette is a cross between two hybrids, one of which traces its ancestry back to Pinot Noir. 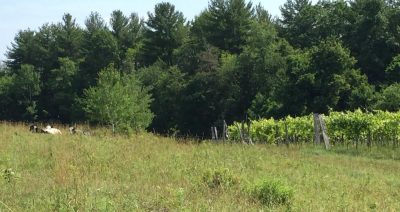 Deirdre Heekin, farmer, winemaker and marketer of La Garagista in Barnard, VT, has arguably done more to promote the potential of hybrids to make interesting wines than anyone. Deirdre’s dedication to unique expressions of terroir has fueled her curiosity to explore “other landscapes in Vermont” by partnering with other organic farmers creating a Garagista family of wines called “Field Studies.” According to Deirdre, “Blood Root Kindle is one of three wines we are making from a high alpine vineyard on the backside of Round Mountain, an undertaking of memory and dream. Fruit is grown by Shabir Kamal on the Thurber family farm {Lilac Ridge} in a field described by daisy fleabane, Carolina horsenettle, and limestone outcroppings. Dairy cows graze in the bony meadow above where lilacs must have once been.” 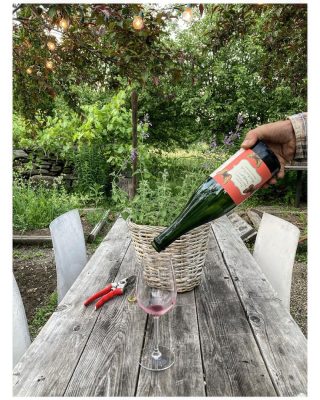 Those of you who have participated in our virtual tastings know that we spend the time in a lively stream of consciousness dialogue with the winemaker who provides thick description of the terroir, grapes and winemaking practices so that we can understand the wine. Here is a bit of an exchange between Deirdre and I regarding the Blood Root Kindle.

The connection to Lilac Ridge goes deeper. This wine, and the others to be released from this vineyard, get their names from poems written by Ross Thurber. Bloodroot is a plant in the poppy family whose white flower signals the arrival of spring. From his poem, “Burn Permit” (those too are not issued by towns until spring’s wet rains have succeeded the dryness and winds of late winter), Ross wrote:

Bloodroot kindle the first flitting lights
across the grove, their white globes half full
with this morning’s passing shower.
—- Ross Thurber, from “Burn Permit,” published in Pioneer Species