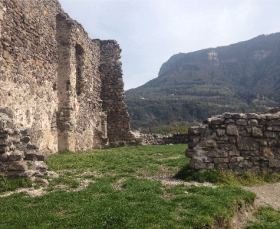 Ines Giovanett, of Castelfeder Winery in Cortina, Italy, will be in town on Sunday, June 29th, for a wine dinner with Zach, Meg and crew at Peter Havens in Brattleboro. Located in the Alto Adige valley of Italy’s rocky Dolomites Mountains, Castelfeder focuses on crisp whites of the area, including Kerner, Muller Thurgau and Moscato Giallo, and cool climate indigenous reds such as Lagrein and Vernastch.

A visit to Castelfeder 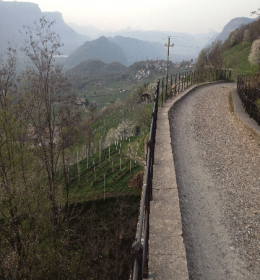 In early April, I had the joy of visiting the Giovanett family, owners of the Castelfeder winery in Cortina, Alto Adige, Italy. The winery was started in 1970 by Alfons Giovanett and was taken over in 1989 by his son, Gunther, and daughter-in-law, Alessandra. Currently Gunther and Alessandra’s children, Ines and Ivan, run the winery with considerable help from their parents and inspiration from their grandparents.

Our trip began with a much needed walk as we had just taken the train from Austria. We ended up on old railroad tracks that were built during WWI to give access into the Dolimites. Here, at the top of a beautiful old train tresel in the middle of Pinot Nero vineyards, Ines and Alessandra shared some Castelfeder Moscato Giallo with the group. This was a perfect way to start the evening, as it was sunset with a great view of the Alps (north), Dolomites (Southeast), Adige River and vineyards (see picture 1).

The evening continued as we made our way further into the foothills of the Dolomites to a small regional restaurant. There we had an amazing meal and enjoyed the Castelfeder Kerner, Pinot Bianco ‘Tecum’ (both from magnum bottles) and, with the main course, the classic Lagrein ‘Rieder’, reserve Pinot Nero and reserve Lagrein, both called ‘Bergum Novum’ (see picture 2). The meal was highlighted by pork ribs that were simply delicious with cabbage and potato accompaniments; while I have a picture of this, it’s mostly of the empty platter and not really worth looking at. 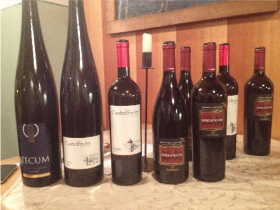 The following day began slowly after a late night, but by mid-morning, we were on our way for a hike up to the place from which the Castelfeder winery gets its name. Castelfeder is the name of the old Roman ruins and the top of the Mont Mes (middle mountains). The Mont Mes serve to break up the upper Adige Valley. The base of these middle mountains was the sight of some of the Giovanett Family’s original vineyards.

The last bit of the hike (well walk really, but after a late night it felt like a hike) was over old Roman cobblestone streets. At the top, Ines and Alessandra put together a fantastic picnic of cured meats, bread and Castelfeder Vernatsch, which we all had unknowingly carried up in our backpacks. Although nobody wanted to leave, we eventually moved on to the winery in Cortina where we sat down for a bit more formal portfolio tasting.

Our second and final day ended with another amazing meal in the village of Egna. The conversation with all the Giovanetts as well as some new friends from California was wonderful as were all the wines (verticals of the Castelfeder Reserve Chardonnay and Pinot Nero). And while it was a short visit, I left feeling very honored to be importing these wines into the US.

Here is a link to a video with Ivan Giovanett sharing views from the Castelfeder vineyards: